It’s about 8 months now that the version 0.1 of B.A.D - The Blockchain Art directory went online. Our aim was to collect as many projects arising around the phenomenon of blockchain backed art as possible, and by the time writing this short note we added 153 items to the database. What happened since October 2018?

OK, the version 0.1 was a heavy birth for us as non-programmers. But the idea was a bit older already by then - we registered the domain after we attended the first #rareaf in New York in January 2018 - and so we decided to launch the page in a preliminary version just before #DevconIV, thus at the end of October 2018. Great, because this allowed us to bring our hand-stamped business cards to Devcon, and to brag with our freshly registered BchainArtDir.eth domain.

Do we really have to add all this by ourselves?

Well, kind of. We tried to figure out which way was more feasible: To ask people to add their project to B.A.D, or to simply adding info by B.A.D members. The decision was taken soon, as we invited people, but didn’t receive replies from them very often. Not astonishing, because B.A.D was by then and is still new. Thus our decision - after some content-wise more sparse months in November and December 2018 - to do the “Fill that form days” in January 2019.

This is how it should go.

60 new entries in January 2019 was not too bad. Quite time consuming as some of the info needed was not very obvious, sometimes even hidden, or even worse - non existent. But hey, after all, we started into February 2019 with a total of 72 entries.

In February, we decided to improve the website and database by adding search and filter options, and thus lift B.A.D from the “list” status to a more useful “data base” status. Chris Maree did some great work by pimping B.A.D, and after two weeks, the first interactive version was ready to go. At least on our computers.

Rather pink than yellow. And could you please add this content, too?

From March through and with early May, we were busy doing the layout and to prepare new contents for B.A.D. This resulted in less entries to the database, but we made some efforts on the conceptual and content level. With the launch of the new website just before #rareaf2 in mid-May, we had achieved our next big goal, and were happy and proud to have a working website with many new features and contents.

… and kept going. Not too fast, but with new contents from time to time. By today, we count 154 different crypto projects on the B.A.D core page, 6 short interviews in the People Portraits section, and a list with currently 36 galleries on Cryptovoxels. Ah, right, and we did that survey.

More stats? Here you are!

We had a peak of items added to the B.A.D database in January 2019, caused by the “Fill that form days” during which we added 58 project over a time of about 2 weeks. 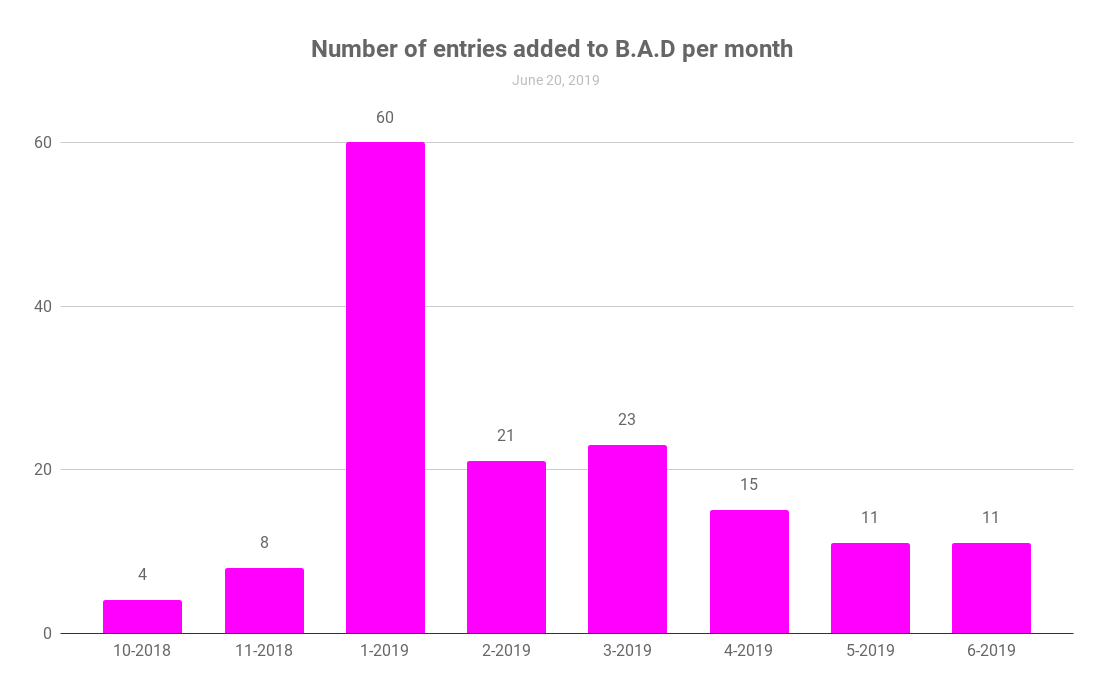 Number of entries added to B.A.D per month

B.A.D is very much Ethereum centered, which is because the B.A.D hosts are involved in this community more than in others. And it might also be because Ethereum experiences a buidl high, more than other blockchains. Anyway: We do our best to cover whatever is related to blockchain art and crypto collectibles. Result: B.A.D currently refers to 26 different blockchains - from “æternity blockchain” to “Wanchain”. 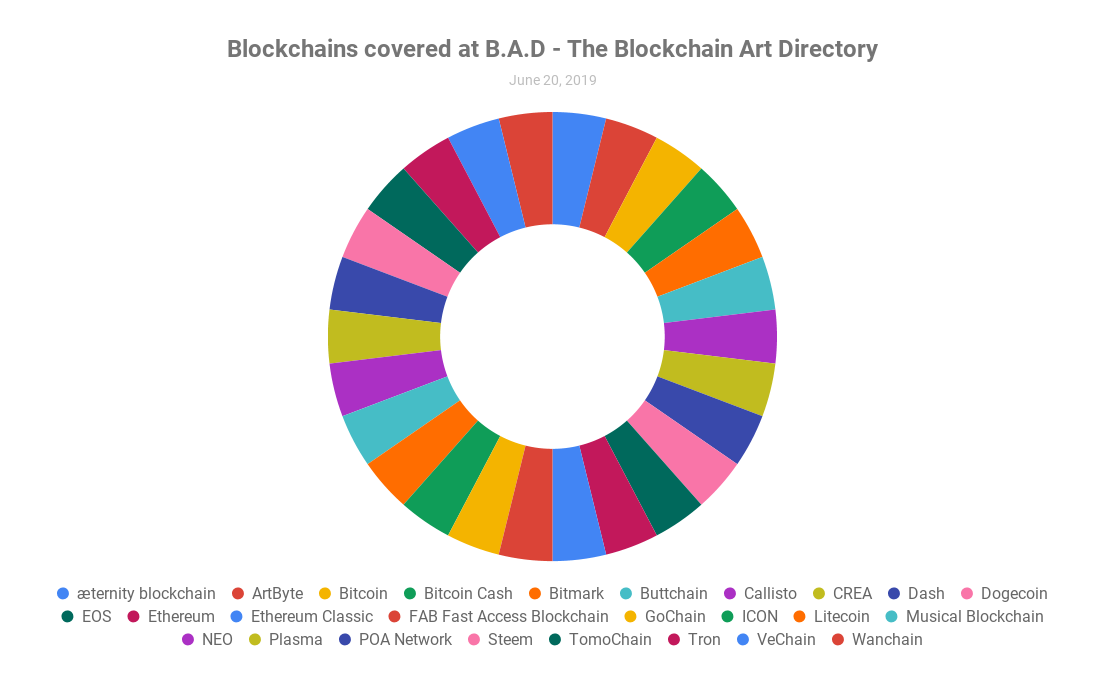 The first 153 items cover 97 different categories (which makes things a bit fuzzy on the one hand, but is expression for the variety of projects and contents currently going on on the other hand), and the top 20 are unsurprisingly lead by “Collectible”, “Marketplace” and “Game”. 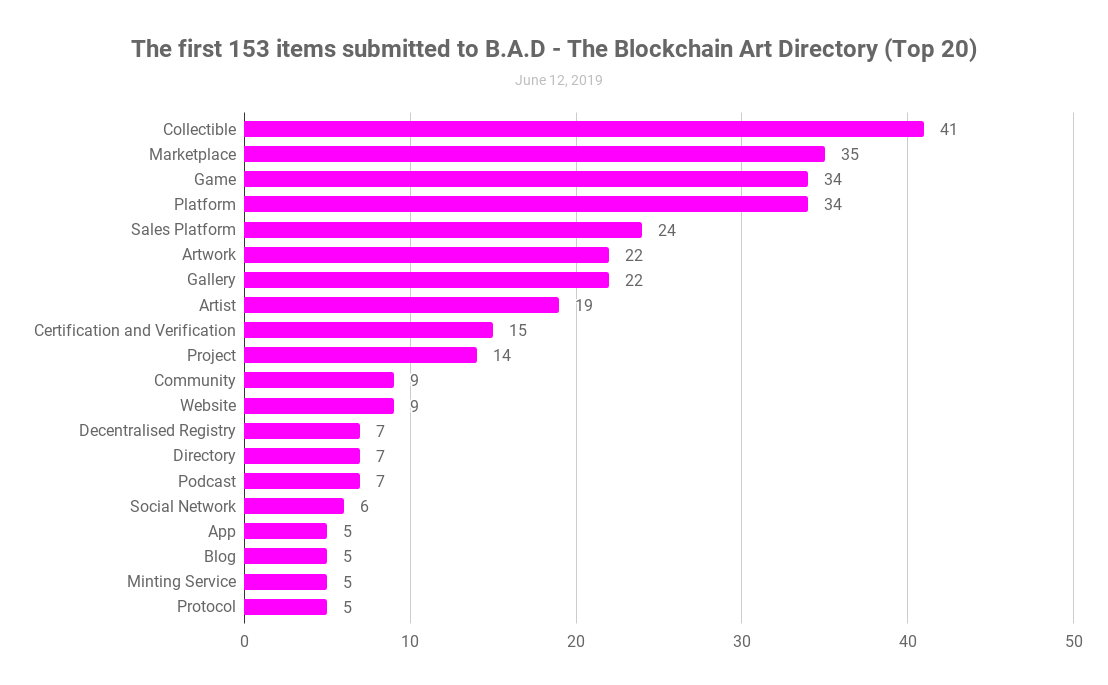 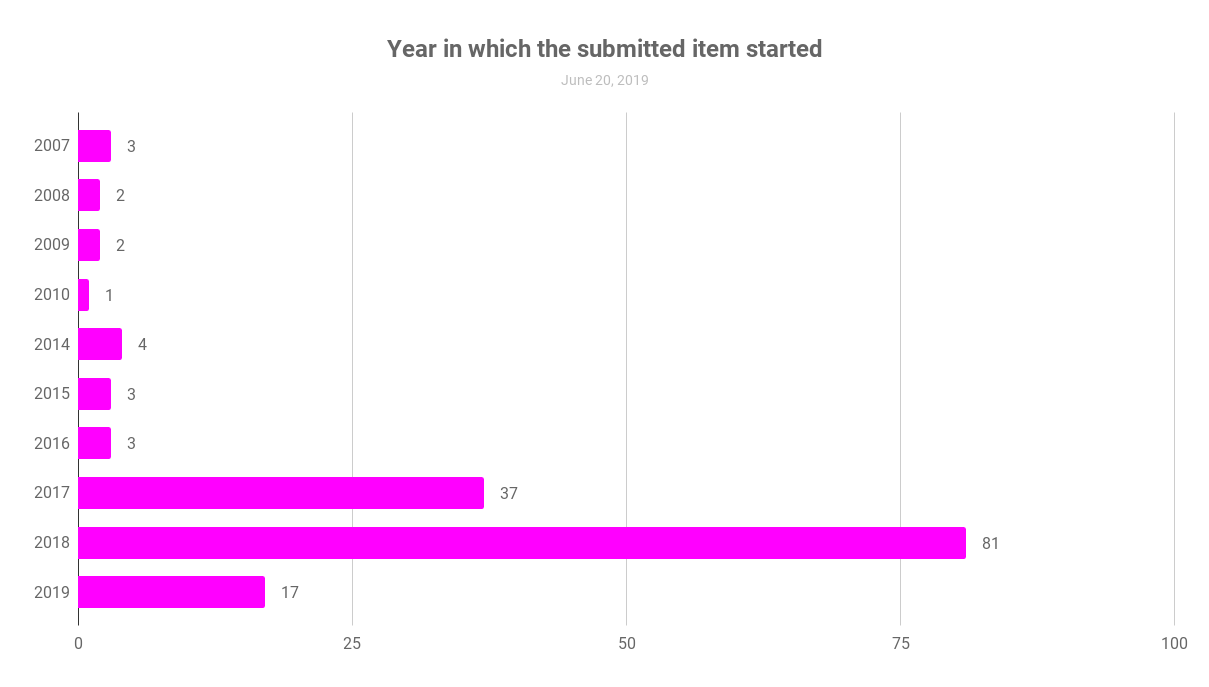 Year in which the submitted item started

Also unsurprising is the fact that most of the articles were developed out of the United States, followed by the UK and Switzerland with 11 items each and Germany with 7 items in third place on the list of 25 countries. 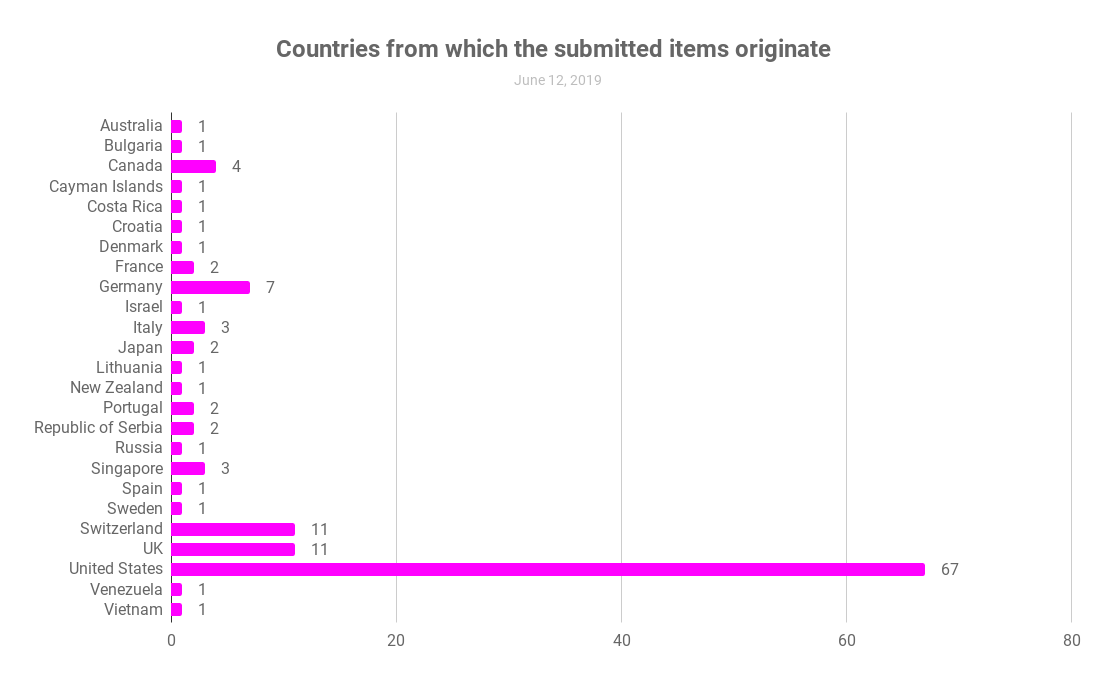 Countries from which the submitted items originate

And would you guess it? The most productive city in the blockchainart sphere is - New York (including Brooklyn), followed by San Francisco and Geneva. 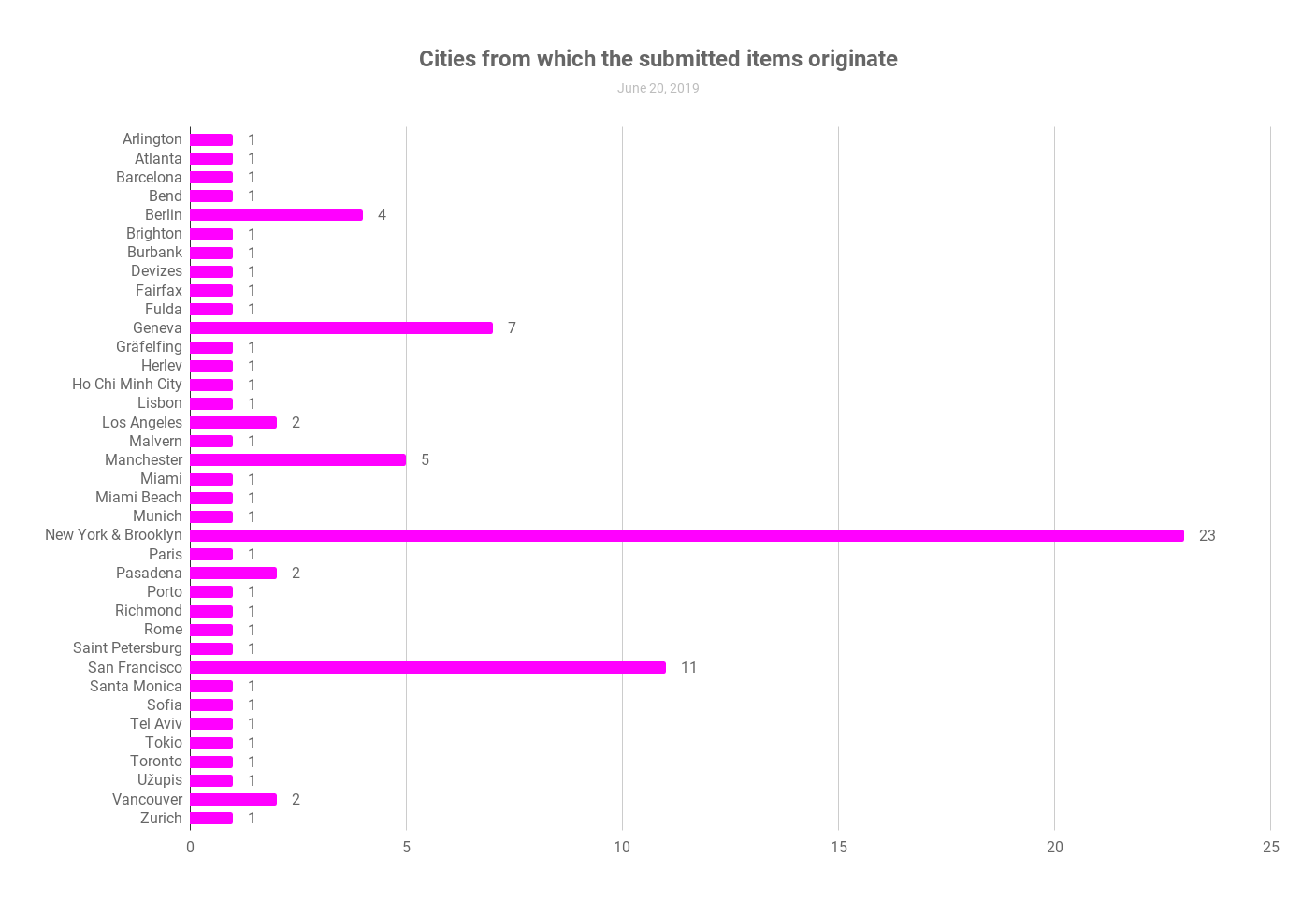 Cities from which the submitted items originate

That’s the stats for entries 1 through and with 153. Nothing spectacular, and nothing representative, but still nice to be able to illustrate the current astate of B.A.D - The Blockchain Art Directory with some numbers and figures.